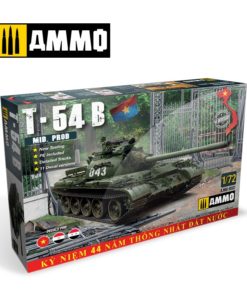 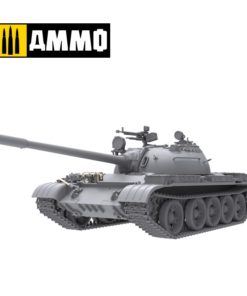 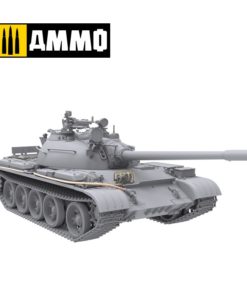 The 1st independently designed AMMO by Mig Jimenez plastic model kit in 1:72 scale. For this momentous product release, we have chosen the world renowned Russian designed T-54B, an equally exciting subject. This universally admired battle tank has served scores of nations around the globe and endured more than a half century of conflict. Our professional vehicle research and access to running examples for measurements has resulted in a marvel of accuracy in this fine scale replica.

The thoroughly researched camouflage and markings guide included with this kit faithfully reproduce a host of attractive options. Because of the prolific service record of this vehicle, the choices of camouflage colors and markings are limited only by references and your imagination.

Going into production in 1957, the T-54B was developed in 1955, and featured a new 100mm D-10T2S main gun fitted with the Tsyklon 2-axis stabilizer, which could fire specially developed APFSDS rounds to dramatically improve armor penetration.

The T-54B was the first Soviet tank to be fitted with night-fighting equipment, which consisted of the L-2 Luna infrared gun sight and OU-3 infrared searchlight for the commander. The T-54 successfully served the North Vietnamese in combat and made international headlines in 1972 during the Easter Offensive and once again in 1975 photographed crashing through the gates of the Presidential Palace in Saigon, signaling the end of Vietnam’s civil war.

Variants of the T-54 saw action during the Hungarian Revolution in 1956, served Egypt and Syria during the Six-Day War of 1967, and were captured during the 1973 Yom Kippur war to be updated and serve as the Tiran-4. The tank was also heavily used by Iraq during the 8-year long Iran Iraq War of the 1980’s, and several are currently serving in the Syrian Civil War in the Aleppo area.